Posted on June 5, 2017 by Victoria Tiedemann

Loyola University in New Orleans and the Modern Day Slavery Research Project that is a part of Loyola University were invited to Covenant House facilities around the country and in Canada in order to see how many people in their programs might be survivors of human trafficking.
Covenant House has been working with helping homeless youth since 1972.  They help nearly 47,000 youth per year.
The research began in February of 2014 and completed it in June of 2016.  They went to 10 cities and interviewed 641 homeless and runaway youth aged 17 to 25 (19 year olds were the most interviewed of all the ages).
This was mentioned in the study:

Homeless youth are vulnerable to both sex and labor trafficking because they tend to experience a higher rate of the primary risk factors to trafficking: poverty, unemployment, a history of sexual abuse, and a history of mental health issues. If they have families who are involved in the commercial sex trade or gangs, their risk is even higher. Homeless youth indicated that they struggled to find paid work, affordable housing, and support systems that would help them access basic necessities. They had experienced discrimination in their jobs and in housing. A confluence of factors made the homeless youth we interviewed vulnerable to both sex and labor traffickers who preyed on their need. It also made them more likely
to turn to the sex trade for survival.

The results from their interviews state that 19% were involved in a form of human trafficking; be it labor or sex trafficking. 91% of those who were trafficked had been approached by someone who gave them a good job offer and instead used it as a form of coercion to enslave them. 19% of all interviewed also had at one time resorted to survival sex.
42% of the youth trafficked were minors when their slavery began.
30% of all interviewed may not have admitted to being trafficked, but they did claim to be in the sex trade at some point in time, sometimes forced.  24% of those were male.
8% of those interviewed were forced into labor trafficking such as domestic servitude, drug smuggling, agricultural work, commission based sales, and factory work.
53% of those interviewed were African American, African, or black (Caribbean roots or otherwise).  19% were white.  There were Natives, Latinos, Asians, or multicultural.  78% reported to be heterosexual, while the rest LGBTQ.  60% interviewed were male. 2% identified as transgendered.   LGBTQ were the highest percentage trafficked.
1 of every 5 heterosexual women and 1 of every 10 heterosexual males were trafficked sexually.  1 of every 5 LGBTQ male were sex trafficked.
21% of all interviewed had foster care history.  Aging out of the foster care system is what led them to homelessness.  29% of those who were in the 19% of trafficking victims had been in the foster care system and led to sex trafficking, while 27% were involved in sex trade work and 26% were put into labor trafficking.  This means that foster care system truly needs to help give life opportunities to those who age out so they don’t become targeted and put into slavery.
In reviewing this information, it makes you wonder how the numbers would look if every person in all of Covenant House’s facilities were included in this research.  To see this from simply 10 facilities and not even 700 people interviewed, this percentage for the amount put through human trafficking is very alarming.  Think of all the homeless people who are not even in these facilities and are still out on the streets.
Donate to Covenant House as a small way to possibly help a victim of human trafficking.
Share with us your thoughts about this research! 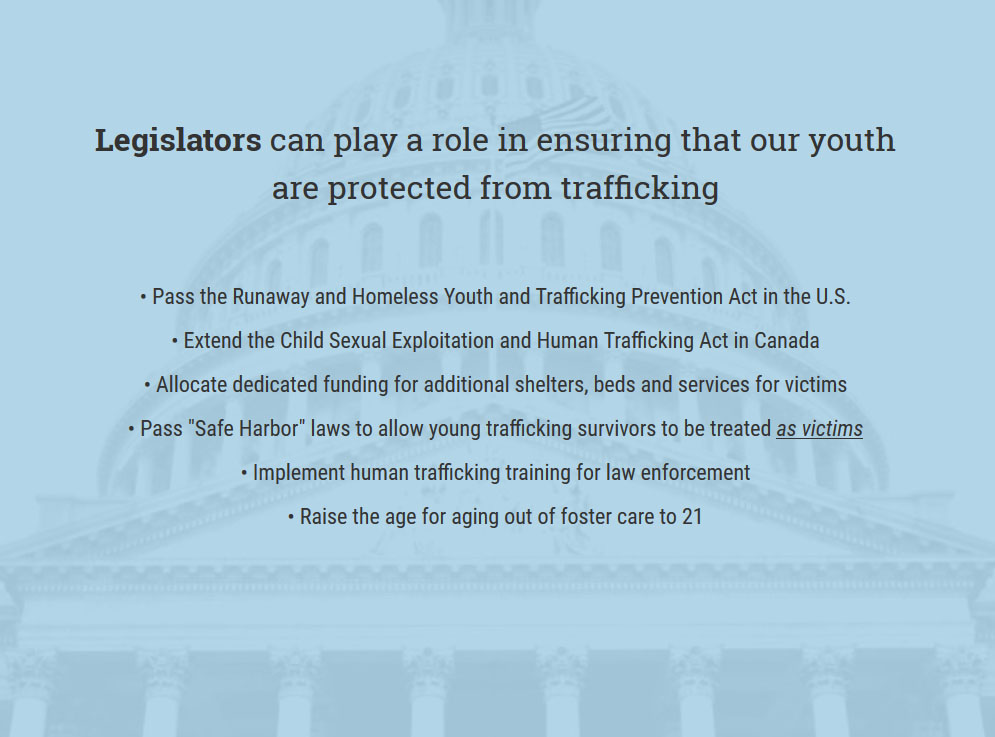