Sex Trafficking Survivor Theresa Flores and the SOAP UP Event

When Theresa Flores was a teenager in the 1980s, her family moved to Detroit, Michigan. She was attracted to a classmate who showed her kindness and would flirt with her.  She was thrilled that he showed an interest in her.  When she had the opportunity to spend time with him, she was thinking of typical teen girl dreams of kissing him. What started as kissing turned into a rape after she protested how far it was going.
After her devastation, the teen boy showed her pictures of her rape that his cousin took from the closet in the room where she was abused.  He threatened to show the pictures to her parents and her church if she did not keep quiet about it.  She was scared as her family’s lives were also threatened if she did not comply with going out in the middle of the night whenever they needed her to be prostituted at parties or hotels.
The trafficking ring that she was “working” for allowed her to clean up after clients.  She called this her sacred bath.  It was the time she was able to be alone and feel most at peace.   She has since written a few books about her experiences and how she overcame the pain (and even how she was released from their bondage).  We recommend her book The Slave Across the Street.

Today, Theresa Flores is a licensed social worker who speaks up against human trafficking and makes efforts of ending child exploitation and prostitution today.  She leads the organization Traffick Free.
On Sunday, May 21, 2017, Theresa Flores will be speaking at the S.O.A.P. (Save Our Adolescents Against Prostitution) event hosted by​ NJ Coalition Against Human Trafficking. ​Theresa created this program in order to help missing children who could be potential victims of human trafficking.  After her speech​, teams of people will take missing children posters to hotel managers and employees to see if they can identify any of the children.
Hotel workers will also be asked if they would be willing to put soaps into the bathrooms of their hotel rooms.  These soaps have the Human Trafficking Hotline number on them.  Polaris has stated that they get an increase of calls after each SOAP event.
If you would like to attend the event on Sunday, May 21st, please register here!  This is a great way to do something in the fight against human trafficking and modern day slavery! 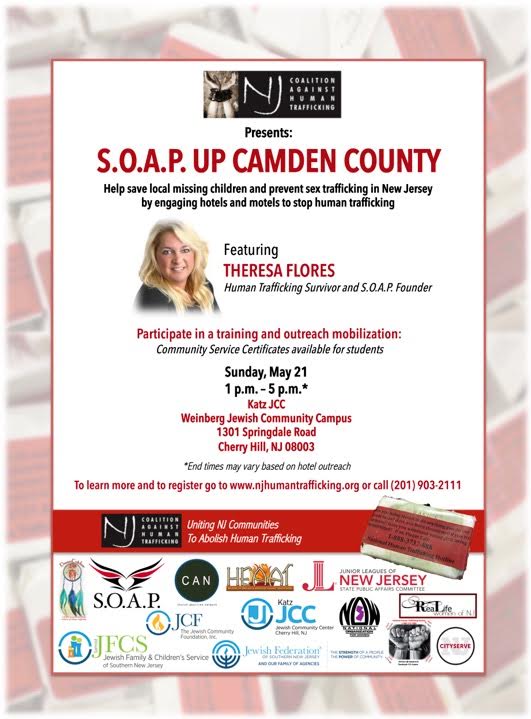