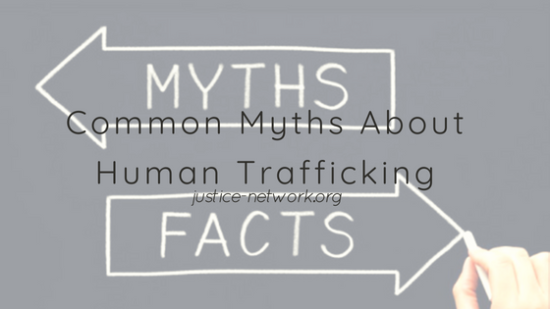 Today is Labor Day: “a public holiday or day of festivities held in honor of working people, in the US and Canada on the first Monday in September, in many other countries on May 1.” Many people look forward to a barbeque or a vacation day, others lament the end of summer or start of school. But for many, there is no rest from their labors on this day or on any day. These are the victims of Human Trafficking, and for them freedom is a myth.
As one of the fastest growing crimes in the world, Human Trafficking is widely misunderstood. One contributing factor to this rapidly spreading global issue is that many myths and misconceptions still exist about its true nature. If you think that Human Trafficking is only related to the sex industry, is not a big problem, or that it could never touch your life than this article is for you. We have compiled a list of the most common myths about Human Trafficking below.
Myth 1: Human Trafficking does not occur in the United States or only involves immigrants from other countries.
Fact: Human Trafficking exists in every country in the world. Cities, suburbs, and small rural towns are all affected. US citizens can also be victims both nationally and abroad. Men, women, and children from every socioeconomic status can all be affected.
Myth 2: Human Trafficking only involves sex trafficking.
Fact: Human Trafficking involves both forced sexual trafficking and labor trafficking. The common thread is the exploitation of people for profit. Victims can be used in either legal or illegal industries by one person or a group of people (or an entire business) as a source of revenue.
Myth 3: Human trafficking is the same thing as human smuggling.
Fact: “Smuggling is a crime against a country’s borders: human trafficking is a crime against a person.” Essentially, smuggling involves illegally crossing borders and violating immigration laws. Trafficking is the exploitation of a human being and may not involve moving them at all. These are two separate crimes that do not necessarily occur together.
Myth 4: Victims of Human Trafficking will seek help or will identify as a victim.
Fact: There are many reasons for why someone would not seek help in a trafficking situation. It is important to remember that this person is currently involved in a very traumatic and dangerous situation. It would be a mistake to assume that they know who to trust for help or that they fully understand the situation they are in. They might be afraid of retribution from their captor, they may be ashamed or self-blame, they may have Stockholm Syndrome, or they may believe they are being watched at all times and see escape as impossible. Each situation is unique and requires compassion and understanding.
Remember, human trafficking is the fastest growing crime in the United States and in the world. By understanding the issue and recognizing the signs you can help make a difference.
For more myths on Human Trafficking please check out the National Human Trafficking Hotline and The Department of Homeland Security’s Blue Campaign. If you suspect that someone may be a victim of human trafficking call a help line immediately. The National Human Trafficking Hotline is 1-888-373-7888. Text INFO or HELP to BeFree (233733).