The Many Faces of Modern Day Slavery 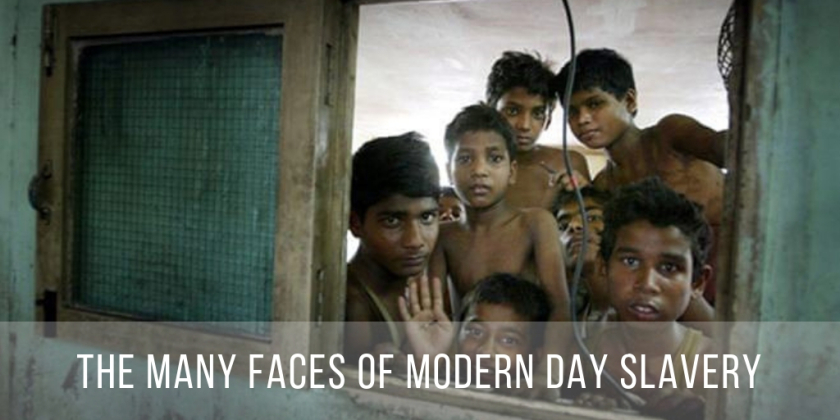 As we head away from the holiday season and into the new year, it is still important for us to reflect on all that we are thankful for in our lives. It is important to show gratitude for having food, clothing, shelter, family and friends, and also for our freedom. Freedom is something that many people in this world do not have. We must not take it for granted. We must also help those who are seeking it. Slavery is not over! Modern day slavery is still a growing problem around the globe. In order to combat this atrocity we need to fully understand what it looks like. Below are the forms of slavery that are still prevalent to this day as described by the US Department of State.

Sex Trafficking This is when an adult engages in a commercial sex act through force, fraud, or any form of coercion.

Child Sex Trafficking This is when any child under the age of 18 engages in a commercial sex act, whether or not coercion is a factor. Children cannot legally consent to any such act.

Forced Labor This encompasses a wide range of activities where a person is forced, manipulated, threatened with violence, or in any other way coerced into working.

Bonded or Debt Labor This is when workers are forced to work to pay off a debt that may be inherited or tied to their employment or status in a foreign country. The debt is often an exorbitant or compounding amount that keeps the victim trapped.

Domestic Servitude This is a form of trafficking found distinctly in private residences. The worker is not free to come and go, is often abused, and underpaid (if paid at all). The victims are often isolated and vulnerable.

Forced Child Labor This usually occurs when someone outside of the child’s family is financially benefiting from the child’s work. The child is forced to perform or work and is denied the option to leave.

Unlawful Recruitment and Use of Child Soldiers This is when children are forced or coerced into the use of a military as either combatants or service workers for the military. Young girls are even forced to “marry” or be raped by commanders and other officers. Both male and female children are sexually abused and exploited for the military agenda.

It may be hard to imagine, but modern slavery could be happening in your own community. It could be tied to a product you are buying or a service that you use. As you can see, there are many forms of slavery that still exist in the world today. Knowledge is power and the more that we know about this global crisis then the more we can do to stop it.